Nexus 4 Review: Smartphone on a Budget

The purchase of my first smartphone a few weeks ago was a big event in my life. The past few years I have somehow managed to survive in the modern world without one. I was subsisting on cheap, almost disposable handsets and empty prepaid accounts. While others were instagramming their meals or browsing the internet on the train, I was staring into the low resolution screen of my $20 phone.

Despite being a massive gadget geek and devoting lots of time reading about new phones and apps, I’d never seriously considered getting one. This was largely because of the high costs of handsets and a reluctance to sign up for a costly phone plan. I’ve sat patiently for years waiting for an alternative option and have finally found it. If you want a smartphone on a budget then this is how!

It’s Google’s new phone and it’s awesome. With a non-existent retail presence, you’re unlikely to to see a Nexus advert on T.V anytime soon. What makes it’s special is it’s power and it’s price tag. The Nexus 4 is faster than the iPhone 5 and about half the price. Coming in at an extremely competitive $350, it’s just about the best value phone ever. With a massive 4.7 inch display and a quad-core processor, it’s incredibly fast to use and can handle pretty much anything you throw at it. The only real drawback is it doesn’t support the new LTE or “4G” mobile network. Which shouldn’t be much of a problem if you’re on a budget because 4G plans will cost you twice as much as a 3G plan.

The Nexus 4 is gorgeous. Google’s playing it safe here with a design that’s not too round, not too sharp. It’s got an expensive feeling with a glass covering on both sides and an etched pattern on that back that illuminates in the light. The front of device is encased entirely by glass, under which sits the 4.7” inch touch screen as well as a front facing camera and a hidden LED indicator.

This indicator has almost become my favourite feature of the phone itself. It sits under the face of the device, undetectable until you receive an SMS, Email, Facebook message or any other notification you can receive. Cooler still, the pulsating indicator changes colour to suit the type of notification ie: Blue for Facebook, White for SMS etc. It’s a simple and extremely usual feature that saves a heap of battery life over the day by allowing you to check for notifications without resorting to turning on the screen. 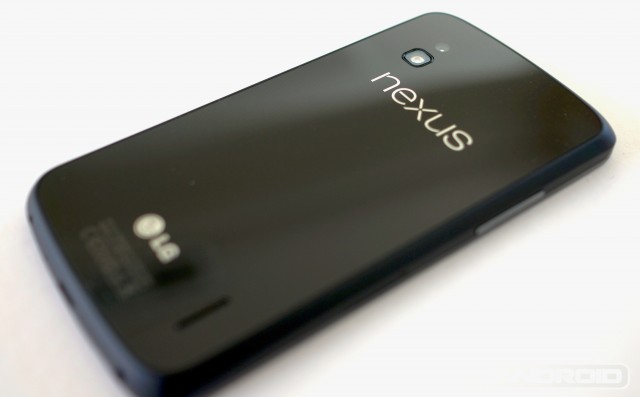 The Nexus 4 has a grand total of two buttons: power and a volume toggle. Each is on the side of the device and fits almost flush with the exterior allowing for only a small amount of button depression. They work well for what they are and don’t detract from the device minimalist style. Other elements on the phones bezel are a basic headphone jack, USB port for charging and two metal screws on the bottom.

The back of the device is pretty similar to the front with a whole glass covering. A notable design element on the back is the etched “pixel” design that creates almost a holographic animation effect when in the light. Not terrifically useful but a nice addition that highlights Google’s attention to detail. In addition to this there’s an 8-Megapixel camera on the back along with a flash for any enthusiast phone photographers out there. Lastly, there's a thin speaker on the bottom right side delivering quality on par with what we've come to expect of phone speakers. 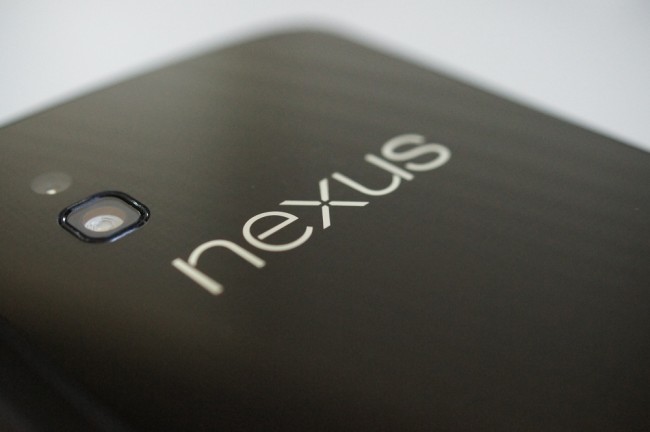 Overall the design of the Nexus 4 is simple but effective. It’s not attempting to look far into the future like Apple’s designs nor is it adhering to the round, organic feel that other Android phones. The hardware finds a comfortable spot between the two and excels in perfectly that balance.

The Nexus 4 comes with Google's latest version of their Android operating system "Jelly Bean". Lucking users with a Nexus 4 get some extra styling and features over other other android phones. The interface itself benefits from the synergy of having both a Google device and Google operating system. Among these benefits is the seamless integration of both the design and functionality of all of Google's web apps and the aesthetic of the device itself. The result of this is a rounder, more synchronized experience as opposed to the fractured feeling that some other manufactures interfaces have.

The minimalist approach to the hardware design is also concurrent with the interface. Google takes on an ultra thin, almost 1960s approach to the software design of the nexus. The interface is largely made up out of sharp squares with some round, organic fonts used for widgets. There's also subtle spots of blue throughout the interface, such as below title bars, various icons and text highlights, that give it a strong retro-futuristic edge. Using the Nexus 4 conjures the old fashioned visions of the future and feels like something a 1950s teenager would have dreamt about. 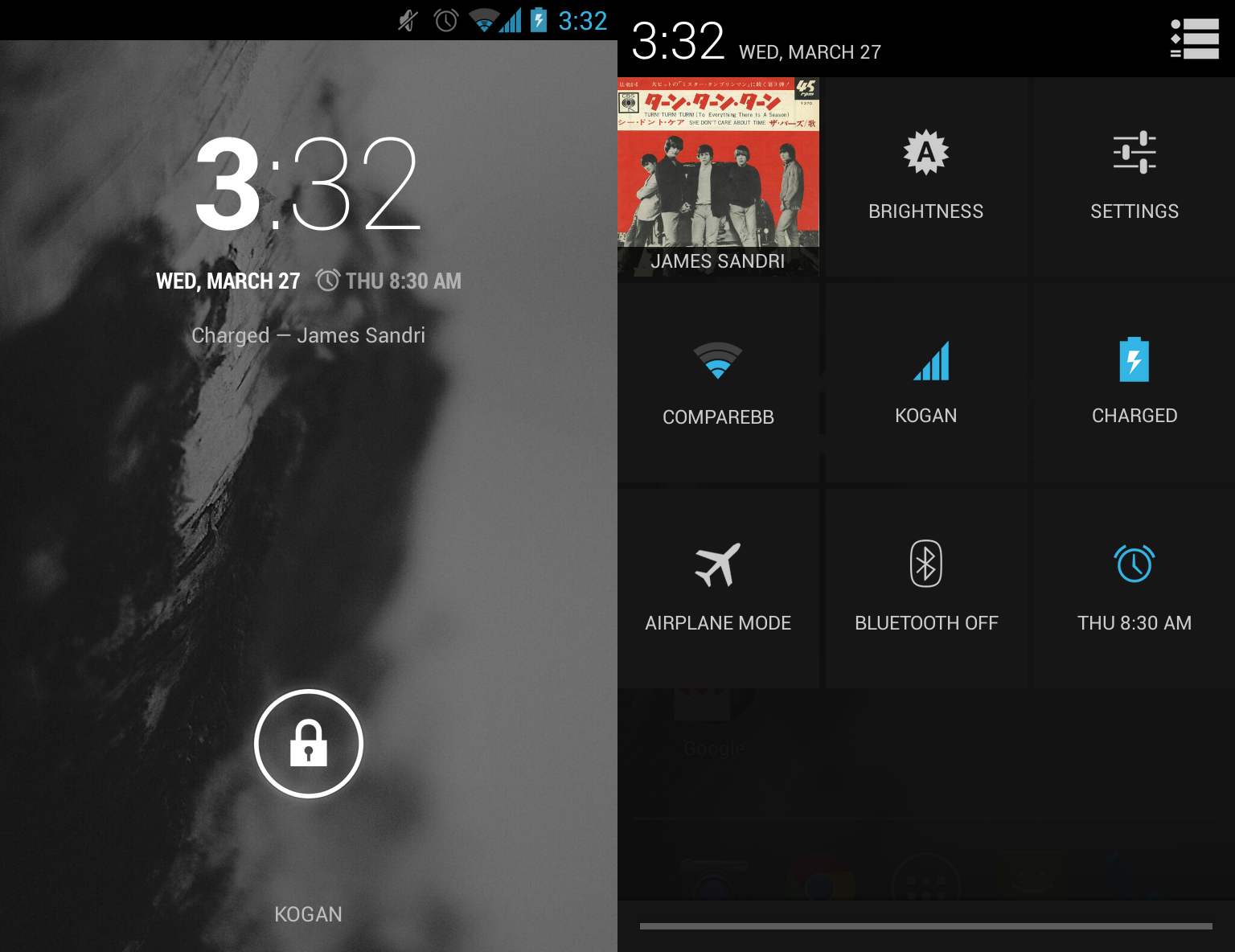 Right now the Nexus 4 is the best value that you’ll get for your money. It’s a sub-$400 dollar device (for an 8GB version) that beats the Apple’s iPhone 5 and Samsungs Galaxy S3 both of which are on sale around $800. It’s a phenomenal opportunity to jump into the smartphone market at a cheap price without sacrificing any features. It’s available online through Google’s store with a shipping time of about 1-2 weeks. For the impatient ones out there (like myself) you can pick one up a bit faster through Gumtree or Ebay.

The Nexus 4 is a great achievement on Google’s part. They’ve already pioneered the biggest competitor against Apple’s iPhone operating system with Android and with each revision of their phone range, Google gets closer to the matching their handsets. The limited advertising for the Nexus 4 and a delayed release to the Australian public through mobile providers has unfortunately seen it miss a shot at massive popularity.  For budget shoppers and geeks out there though, this has reserved a special place for the Nexus 4 as a “hidden treasure”. If you’re looking for a good deal, here it is.

Need a high density data plan for your Nexus 4? Optus offer unlimited texts, calls and data for only $2 a day. Call Optus now on 1300 137 897 for more information!