The majority of Australians would not object to a new National Broadband Network (NBN) tower in their area if it meant they could access faster internet, according to a poll.

Broadband comparison website Compare Broadband asked site visitors "Would you object to a new NBN tower in your area?" Of the 610 people who responded to the poll, around two thirds (64%) said "No, I would accept one if it meant faster broadband speeds" while 32% said they would object over environmental or health concerns, and the remainder were not sure.

Compare Broadband spokesperson, Sarah McDonald, said: "The NBN Co has warned that the roll-out of the NBN in rural areas could be delayed due to objections to new towers but this poll shows opposition may not be as strong as feared."

Those connecting to the internet on the NBN Co's fixed wireless network will receive a 12Mbps connection, which will be faster than an ADSL or current mobile broadband plan. The 5 locations where work has commenced for connection to fixed wireless are Tamworth in NSW, the Darwin region in NT, Toowoomba QLD, Ballarat region VIC and Geraldton region WA. The fixed-wireless roll out is expected to be completed by 2015 and will require the construction of new mobile towers, up to 40 metres tall.

However, NBN Co has faced opposition to plans for new towers from communities involved in the initial roll out, over health concerns or perceived negative impact on the environment. Several groups of residents near Ballarat in Victoria have lodged protests against plans to build 20 new towers in the area.

Rhonda Griffin, spokesperson for NBN Co, said each new proposed site is assessed for its predicted Electromagnetic Energy (EME). The EME from NBN equipment is only a small fraction of acceptable safety limits.

"This is because the power required to operate a fixed broadband network is really very low, particularly when compared to the power levels required by TV and radio broadcasts," Ms Griffin said.

According the World Health Organisation (WHO), there is no convincing scientific evidence that the signals from mobile towers cause adverse health effects.

NBN Co chief executive Mike Quigley has warned councils who ultimately reject planning permission for the structures would be restricting their communities to slower satellite connections at maximum speeds of 6Mbps. The roll out of the fixed wireless network could also be slowed by planning permission delays, according to Mr Quigley. 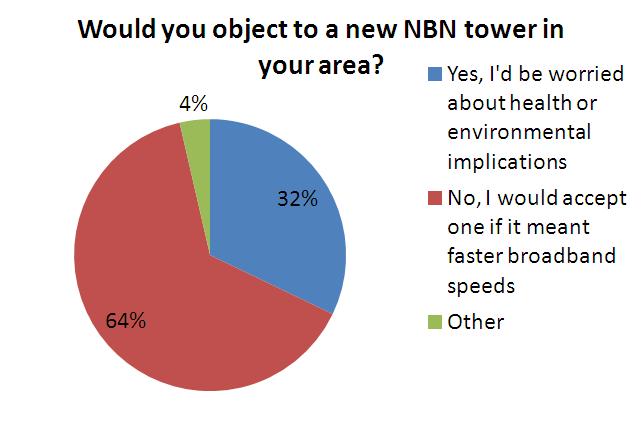 Tile: Never lose your keys again
As the old saying goes: necessity is the mother of invention. In the modern age of technology we can now begin to find better solutions to life’s old riddles...such as how do I stop losing my keys!? Tile is that answer. As the name suggests, it’s a small white tile you can attach to your important belongings that transmits a low power bluetooth
Which internet providers have Australian-based customer service?
This is a sensitive topic. There’s no other way of putting this: trying to get a complex billing or technical problem fixed by a customer service rep, for whom English is a second language, is difficult. It can be stressful. It can also be easy and non-eventful, all while having saved you several dollars on your monthly bill. There’s no doubt about
Finding a broadband provider proves frustrating
Finding a provider is the most frustrating part of buying a broadband plan, according to consumers.Over a third (34%) of the 716 respondents to a poll on Compare Broadband said 'finding a provider in my area' is the number one cause for frustration when trying to find a plan.Confusing technical terms, like ADSL2+ and WiFi, were a major obstacle to
Regional boost from the NBN
High-speed National Broadband Network (NBN) connections outside metro areas could encourage people to move from the city to regional towns, according to a poll.Broadband comparison website Compare Broadband asked visitors “Would an NBN high speed internet connection encourage you to relocate to a rural area?” Of the 519 respondents, 40% (207