Why is my USB Dongle so slow?

We’ve done other articles on what slows down an internet connection. But they’ve mostly dealt with fixed-line connections over telephone lines. What about the millions of Australians who use mobile broadband, via a standalone USB dongle that plugs into a laptop? What specifically affects them? 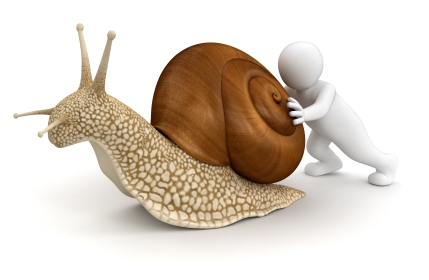 Mobile Broadband, sometimes referred to as wireless, is not common in much of the rest of the English-speaking world. In places like the UK and USA, fixed-line broadband is muchmore widely available. This is mostly because these areas are more densely populated, making it cheaper and easier to connect people to fixed connections(like a telephone line).

Mobile Broadband, or data-over-the-air, is included with smartphones, which already connects to the same mobile network to make phone calls and send messages.
In Australia, mobile broadband to a smartphone has been around for a while. But because of Australia’s unique situation (massive country, small population), fast mobile broadband was seen as a good stop-gap for many people in far-flung areas to get a broadband connection. Instead of using smartphones, a SIM card (the little chip that connects to a particular network) could be put into a small USB device, which then goes straight into a laptop (or PC).

Apart from its function of providing broadband over the air to more people, Mobile Broadband USB sticks (dongles) are also attractive because they’re small and portable. They also make your connection portable – available wherever you have a mobile signal.

As speeds became faster, Mobile Broadband has been marketed as a legitimate replacement for a fixed-line connection, particularly for people who don’t think of themselves as big internet users.

Car metaphors seem to work well, so let’s use one. I have a cheap, 20 year old Mazda. It’s pretty beat up, but I only need it to go from home to work. I know nothing about cars. Should be fine, right?

Actually, no. If I know nothing about cars, then I know nothing about keeping an old and difficult car like this in working order. The oil is hard to change. Parts are not widely available. Mechanics charge me more because fixing issues is more labour intensive. I don’t have enough knowledge to get the best out of this old car.

For an inexperienced car person, a more expensive car is much more suitable. The design has been simplified. It’s easier to repair, fitted with sensors and chips to assist the mechanic in finding faults. It breaks down less in normal conditions.

Mobile Broadband is a little bit like that. It’s a “good enough” solution, giving you access to a connection that can be easily affected by weather conditions, interference from buildings and other limitations. You get very little data. You need to place it somewhere in the house that gets good signal. It takes a lot of know-how to get the best out of it, and the technology behind it is shifting quickly.

A fixed line connection, like ADSL or Cable, is much easier by comparison. Once set up, it offers a fast, cheap and stable connection. It’s always on. It doesn’t get ‘interrupted’ to the same degree. You may have to reset your modem from time to time, but otherwise, it just sits next to the phone line and pipes in the data. ADSL is like the more expensive car- it comes closer to just ‘working’.

But to get back to the point – Mobile Broadband speeds are slow, even when they’re fast. The speed advertised is the best speed under optimal conditions. When Telstra or Optus boast that their network is capable of a 20Mbps connection (which is faster than most ADSL connections), this is roughly what they mean:

Each tower ‘cell’ can transmit, on average, maybe 100Mbps from a high powered microwave dish.

Each cell usually has 5 people on it at any one time.

Provided the individual has a clear line-of-sight connection to the tower, they will get 1/5th of that speed.

Here’s where that falls apart:

1.    Networks become over-subscribed. The contention ratio (the number of people competing for each connection) is set for 5:1. But often, when a network gets really popular, the number of subscribers blows out, and soon your contention ratios expand dramatically, all the way up to 50:1 and beyond. A network provider can tolerate that, provided that use is spread out through the day. But when people use their connections to continuously stream video, or play games, or download music, then it’s harder to maintain good quality connections to everyone.

2.    Very few people have a clear line-of-sight to a tower.
Even if a connection is very powerful and able to penetrate walls, it will still get slowed down by obstructions.

Mobile broadband providers try to get around these issues by installing more towers (and more cells), and by turning up the heat of those connections, so that you get faster speeds from the tower. Even though the same problems exist, the idea is that the speed that gets to you will still be fast enough. For example:

If we transmit at 100Mbps, people get 2Mbps on average, by the time the connection gets to their phone or modem.

If we transmit at 500 Mbps, then people will get a 10Mbps speed by the time It gets to their modem!

For mobile broadband to act as a genuine replacement for a fixed line connection, a mobile tower would literally have to be installed for every 5 or so addresses. That’s never going to happen. Or, speeds would have to be jacked up  so screamingly high that concerns over radiation would become very real, and not just an alarmist think-piece in the morning paper.

How to improve a mobile broadband connection

For some people, mobile broadband is the only road. These include people who live too far away from a telephone exchange to get a fixed-line connection, or are on landline systems that are incompatible with a broadband connection (Pair Gain and RIM connections). Here are the main steps you can take:

1.    Network. Telstra’s network has long outclassed the competition, both in terms of coverage and speed. Optus still has wide coverage, but speeds are a little more compromised. Vodafone has had some well-publicized problems with their network over the last 2 years, but has been rapidly improving with more towers and better standards. Most other companies re-use Optus’ network.

2.    Modem. That little USB dongle is the worst possible solution. The antenna inside is tiny, and the unit is powered by the USB port on your laptop. Less power means a weaker signal. All of the networks will be able to offer a gateway modem, the main feature being that it can wirelessly share the connection. But the real benefit of these bigger, AC powered units is that they’re equipped with bigger antennas. They can also be connected to even bigger antennas, which brings us to:

3.    Fixed Wireless. This is a setup where you have a high-gain antenna (like a TV antenna) mounted to your roof, and a normal antenna lead coming down to the house, and connecting to your modem. This can boost coverage, but won’t have a huge impact on network congestion. We can’t directly refer to supplier, but a Google or Yellow Pages search for your local area should turn up some results. This solution isn’t necessarily as expensive as it sounds, with some small antennas costing less than $60, and installation only taking an hour or two with a professional. It’s the equivalent of installing a TV antenna, mobile car kit or satellite dish, and it’s a solution most people don’t bother with because it seems difficult. Be a canny consumer – look into it!

Mobile broadband is a ‘good enough’ solution for internet on-the-go, but it is not really designed for the type of always-on connection we need these days. If it’s your only solution for a home connection, look a little deeper into novel solutions for boosting your signal.

For the cheapest fixed-line broadband solutions, click Best Wi-Fi Broadband Plans, or call us on 1300 106 571