How does Wi-Fi Work?

Ever wondered how your Wi-Fi actually works?

It can be a little confusing to the uninitiated. In another article, we wrote about the difference between Wi-Fi and Mobile broadband, and how the word “Wireless” can confuse the two.  It’s important to know the distinction, especially when calling service providers to connect a new service. In a nutshell, Mobile Broadband is a way to wirelessly connect to the internet, via a mobile data network. Wi-Fi is a way to wirelessly connect to your modem, which can be connected to the internet via a fixed line (ADSL or NBN) or via a mobile network. Like so... The internet is carried directly through the mobile network (the same network that carries mobile phone calls) and goes to a USB stick, which plugs into the computer. So in this case, the actual connection to the internet is wireless. You can use the internet wherever you have network coverage. Again, Wi-Fi is a feature of your modem and is only wireless up to around 50 feet, whereas Mobile Broadband is a direct wireless feed to the internet.

. Using Mobile Broadband is like filling a glass from a sprinkler. The actual water source comes over the air.

. Using Wi-Fi is like filling a glass from your tap. The water is piped in directly to your home, and only has to ‘jump’ to your glass a very short way, from the tap to your glass.

The analogy is apt for a few other reasons. Filling a glass from a sprinkler is difficult – some water goes to ground. Some gets evaporated. A lot of it goes to other people under the sprinkler. That’s kind of the way mobile broadband is limited. It’s expensive and difficult to get lots of water to many glasses when distributing it via a sprinkler. But it’s cheap and easy to deliver plenty of piped water. Same with broadband – data that is piped in is more plentiful.

SO WHAT IS WI-FI?

Like may technologies, Wi-Fi is defined and developed by an international trade association, called the Wi-Fi Alliance. It is linked to the Institute of Electrical and Electronic Engineers (IEEE), a U.S. body that sets electronic standards that most of the rest of the world aligns itself to.

The standard for Wi-Fi is catalogued by the IEEE under standard 802.11. When you buy a router or compatible device (like a laptop, tablet, phone or printer), you may notice that one of the sale points is that it is 802.11n compatible. The letter on the end refers to different revisions of the standard, for better speed and distance. 802.11n has been around since 2009, and has a range of about 70m before it stops dead. When boosted over an outdoor network (with no line-of-sight interference), it can maintain signal over 250m. 802.11g, the previous standard, could accomplish half of that. The next proposed standard, currently in testing, will be able to stream a lot more data in different channels, but now we’re getting ahead of ourselves.

HOW CAN I TELL THE DIFFERENCE?

Some devices (mainly smartphones and tablet computers) can come with a function to switch between Wi-Fi and Mobile. So when you’re at home, your tablet or phone can connect to the local, wireless home network, and use your cheaper, faster and much better value fixed line connection. And when you’re out of range you’ll switch to your mobile broadband connections. Most devices use the Wi-Fi symbol to denote when you’re on your home connection: When I walk away from the office modem, notice that my signal starts to go down... 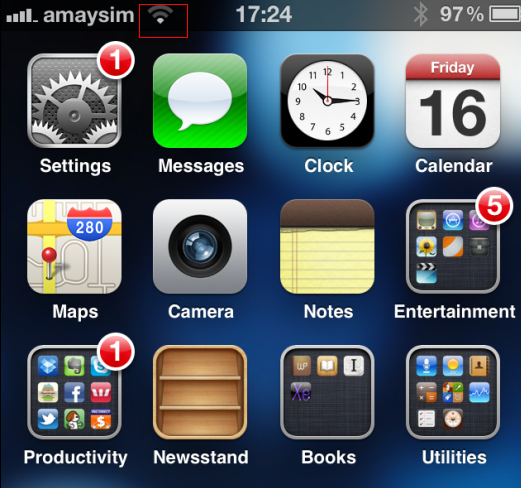 And when I get far away enough that I’m out of range, I revert to the mobile network... BUT WAIT, THIS IS ALL RADIO WAVES - WHY IS THERE A DIFFERENCE?

This is a really good question. There are big similarities in terms of how the technology works, but there are big differences in how they’re applied. When you connect via 3G/4G/Mobile broadband, you’re at the mercy of buildings, weather, walls and the power and range of a network. When you connect via Wi-Fi, the only real disruptions can come from whatever is between you and your modem (and portable phone handsets, which run on the same frequency).

Mobile networks are moving towards becoming more Wi-Fi – ish, to increase stability. So instead of connecting to a tower, which connects to another tower, and then another, and then another (imagine a sprinkler being fed by another sprinkler), you’d connect to a tower that has a fibre-optic connection back to a network at the base of the tower. So the tower is, in effect, like a big Wi-Fi network. This is already employed, to some degree.

So when you’re shopping for a new internet plan, make sure you’re using the right term!

(NOTE – THIS NEXT PART IS OPINION ONLY) Most companies would like to pretend that there’s only THE INTERNET and that all ways of connecting to it are equal. If you ask for wireless, you may start down a road for a connection that is, per megabyte, far more expensive and usually less stable. It’s good to keep educated and to be specific, so that you can better get what you want.

You can click here to check out the best Wi-Fi plans for your location and budget, or you can call us directly on 1300 763 813 for details. Free service!

Do I need an NBN Modem?
The NBN is tumbling towards completing its nationwide rollout. At the time of writing, over ten million Australian residencies have already been hooked up to the NBN (or National Broadband Network, if you have the time), and by 2020 it is estimated that rollout will be complete, with the rest of Australia's fixed-line phone and internet services
Refresher: What is a modem?
The word modem, for many people recalls the screechy plastic boxes made by firms like US Robotics that were in use in the Dial-Up age, c. 1997. These sturdy little units could deliver Yahoo, Geocities and Hotmail at the blinding fast speed of 56 kilobits per second (but usually 32 kbps to keep more stable).For a guide on how to configure an old
Why is my download speed so slow, and where does my connection come from?
Dodo, iPrimus, TPG and Club Telco all offer plans with unlimited downloads. Internode, MyNetFone, Optus and Telstra all offer plans with hundreds of gigabytes. The average Australian usage is about 21GB a month, though that figure is rapidly rising. So who is using all that data, and what for, and why are some things slower than others? Click here
How to configure your old Telstra or Optus modem to use with another Internet provider
Mobile phones have a market model that most people can wrap their heads around. In exchange for 24 months of guaranteed service, mobile providers will furnish you with the latest handset for free (or for a few dollars a month). The long contract offsets the price of a device that would otherwise cost you hundreds of dollars to buy