How superior is Labor's NBN? NBN speed test lets you be the judge

The current NBN debate has been heavily focused on speed, particularly guaranteed speeds that each party is promising. For those who are not tech savvy it is hard to image what the speed difference would look like, or how an increase or decrease in mbps affects internet usage. Brisbane PhD student James Brotchie has developed a solution to this problem with his viral website howfastisthenbn.com.au. If you haven’t seen it already, the website went live on Tuesday and has received over 80,000 views, 50,000 likes on Facebook and is gaining much attention including a re-tweet and a Facebook share by Communications Minister Stephen Conroy and a lengthy retort by Shadow Communications Minister Malcolm Turnbull on his blog.

The website cleverly provides the viewer with interactive examples and demonstrations of what the differing policies would offer. It is extremely effective as it translates the jargon of numbers into a tangible, visual example. Australians can easily compute that Labor’s 1000mbps is much faster than the Coalition’s 25mbps, but what does this difference feel like? Is 25mbps fast enough, do we really need 1000? What are the practical usages for 1000mbps, where would we see a noticeable advantage for high speed?

The website is clever and effective but not without it’s criticisms. The website was branded by Turnbull as “a thoroughly biased piece of propaganda” that is “inaccurate and intended to mislead”. In terms of the website being generated as Labor propaganda, Brotchie considers himself a Liberal voter who has become disillusioned by both parties and simply created the website to produce some much needed clarity on the debate. In terms of the website being inaccurate, the mathematics used to create the data is sound and based on real figures provided by each party.

Turnbull also argues that the simulations would not be achievable in the real world. In his blog he maintains that the simulations do not accurately reflect what would happen when you take into account factors such as contention and weak links along the network between server and user; thus the super-fast Labor NBN may be slightly not as fast in reality. While this is a legitimate concern, it would also apply to the Coalition’s NBN. One could argue the howfastisthenbn.com.au comparison is relative when you take into consideration real world outcomes. Minor nit-picking aside, the simulation poses much deeper questions. The simulation provides real world examples of how a super-fast Labor NBN would benefit Australians. And the benefit it would appear, on the surface, is the ability to download entertainment in seconds and upload funny YouTube videos in record time. Is the extra speed worth the extra money and time for a Labor NBN? Should Australians be satisfied with the highly usable 25mbps that will be delivered quicker to each home in Australia? Considering there is a portion of the population that do not have internet services available to them at all and an even greater portion that access speeds of 4mbps or slower, the speed displayed on howfastisthenbn.com.au can come across as excessive and indulgent.

This point should not be dismissed lightly, as it often frames the NBN debate. Why build more expensive and time consuming infrastructure for faster downloading and uploading when an alternative solution provides a slower but capable speed for a fraction of the cost and time? The answer has less to do with speed and much more to do with investing in optimal infrastructure and having a sensitive consideration for the future of technology.

Those who say “faster downloads, so what?” need to take into consideration the current state of broadband technology available to Australians. The technology delivering the majority of broadband connections in Australia uses the copper lines from the Australian telephone network. These lines were originally designed to transfer voice data, and although they have been efficient to an extent in transferring internet data as well, the technology is not optimal for two reasons. The first reason is that copper is incapable of delivering a consistent speed over distance. The longer the copper line is the slower the internet will be. A house that is connected by three kilometers of copper cable will not be able to access data at 24mpbs because the copper will not support this at such a long distance. The second reason the copper network is not optimal is that is an aging network. The lines need constant upgrading and maintenance and it has been estimated that copper has a life expectancy of 30 years. Around 85% of Australian homes are currently connected to copper that is older than 30 years. 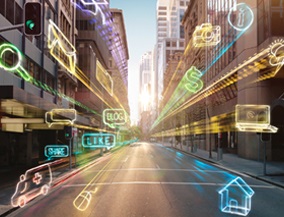 When comparing the Labor NBN and Coalition NBN we are really missing the point if we focus on speed as the factor of comparison. The key difference in policy is that the Labor NBN aims to restructure the entire communications network in Australia by replacing the aging, non-efficient copper wiring with next generation fibre optic cabling; the fibre cable will run straight to the home. The Coalition NBN will retain the old copper but restructure it so that each Australian can have access to decent speeds. They will run shorter lengths of copper to each home that will connect to mini exchanges called nodes. The Labor NBN is about planning ahead and investing in infrastructure for the future. As we move through the digital age and deeper into the 21st century we need to be prepared for new technologies and potential new ways of experiencing the internet. A speed of 1000mbps may seem excessive to some now but one day this speed may be necessary for optimal usage of the internet and other applications.

Conclusion
Brotchie’s website howfastisthenbn.com.au expertly demonstrates the vast gap in speed between Labor’s NBN plan and the Coalition’s NBN plan. However, we should be careful not to fixate on speed as the point of comparison between policies. At the heart of the debate is infrastructure and innovation. Labor’s policy is superior because it replaces an insufficient system with a network that utilises the best technology for data transfer and distributes it equitably around the country so that each Australian has equal access to the same technology and the same speeds. Labor’s high ambition and considered planning needs to be appreciated. If completed, this will be one of the first and best broadband network in the world.